Amid the uncertainty caused by the pandemic, the top 25 S&P companies boosted investments by $150 billion this year but experienced lacklustre returns.

US corporates put liquidity first this year, with the top 25 S&P companies adding $150 billion to cash and bond holdings during the first nine months of 2020. But in an environment of emergency central bank action, and near-zero US interest rates, their interest income has plunged.

According to analysis of disclosures by EuroFinance, investment returns at the largest companies, as ranked by the size of investments, fell by an average of 1.3 percentage points during the year. No company amongst these were able to provide a better effective interest rate on their investments in 2020 compared to the previous year.

At the start of the pandemic, corporates in the US started piling up cash and dumping up securities holdings. By the summer, US companies saw a shift towards corporate and government bonds which rode on the sentiments of US Federal Reserve intervening to restore the market fundamentals and undertaking large-scale bond purchases.

In the third quarter, as the need for emergency liquidity receded, the top 25 S&P companies dumped cash and cash equivalents (CCE) and raised securities holdings. In particular, cash declined by $24.5 billion and securities holdings went up by $26 billion.

In year-to-date terms, cash rose by $69 billion, while securities holdings went up by $81 billion making a total change in investments of $150 billion among these companies.

But with interest rates at record lows, the purchases have led to the drop in returns on investment holdings at these companies.

EuroFinance calculated the effective interest rate by dividing annualised net interest income and with average cash and securities holdings between two periods. Anthem, Coca-Cola, Humana and Intel have managed to maintain their effective interest rates well above two per cent. Coca-Cola till last year had its 94% holdings held outside the US, stopped reporting about these investments since Q1. 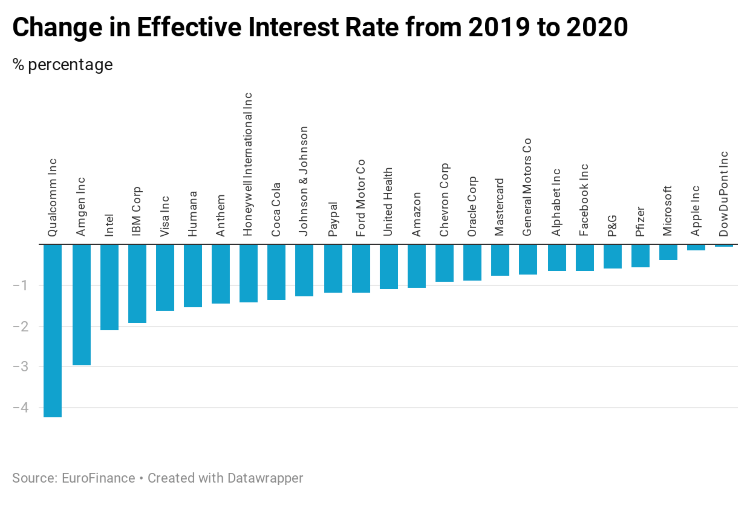 Semiconductor company Qualcomm was the biggest loser in terms of effective interest rates managing to post merely 0.01% versus 4.2% in 2019.

The largest change in cash holdings was observed in drugmaker Pfizer which went up from $2billion in 2019 to $13.8 billion at the end of Q3 2020. The major chunk of it came in the form of money market funds which increased from $750 million to $12.2 billion. The company also experienced a jump in its debt by $10.9 billion in the same period.

There is a strong positive correlation between the ratio of securities to cash at each company and its investment returns. Doubling this ratio increases the effective interest rate by an average of one percentage point, the data shows. The biggest tech companies by market capitalisation – Apple, Microsoft, Facebook, Alphabet and Amazon – have seen their global dominance reinforced by the pandemic. These companies, which hold 56% of total investments among top 25 S&P companies, have seen a shift in their investment patterns. Placing a lower priority on liquidity, the tech giants led by Amazon and Facebook have decisively switched from cash to securities. 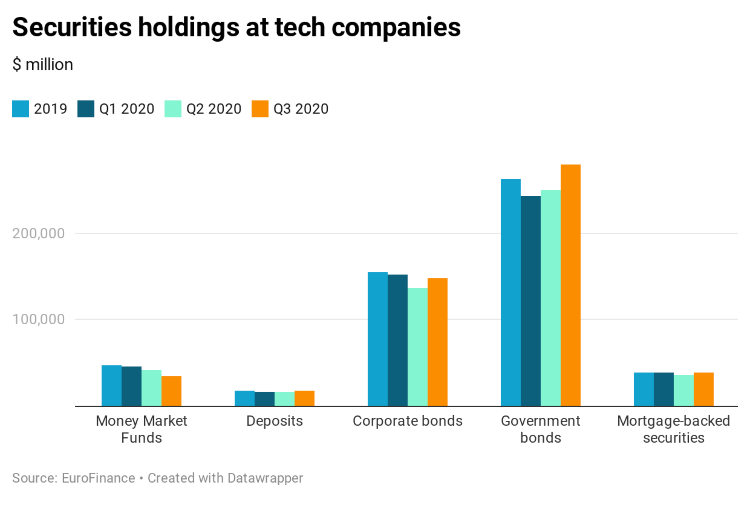 The lower investment returns seen this year can be attributed to a large dip in yields and rates in capital markets and accumulation of debt on balance sheets.

At the start of the year, these top 25 S&P companies had $742.2 billion of short and long term debt which increased by 16% at the end of the third quarter to $863 billion.  After seeing a massive dip at the start of the pandemic, bond yields slowly increased in Q2 2020 and Q3 2020, but are still far below their pre-pandemic levels.