Zumwalt Bows Out As Retail Rivals Snap At Amazon’s Heels 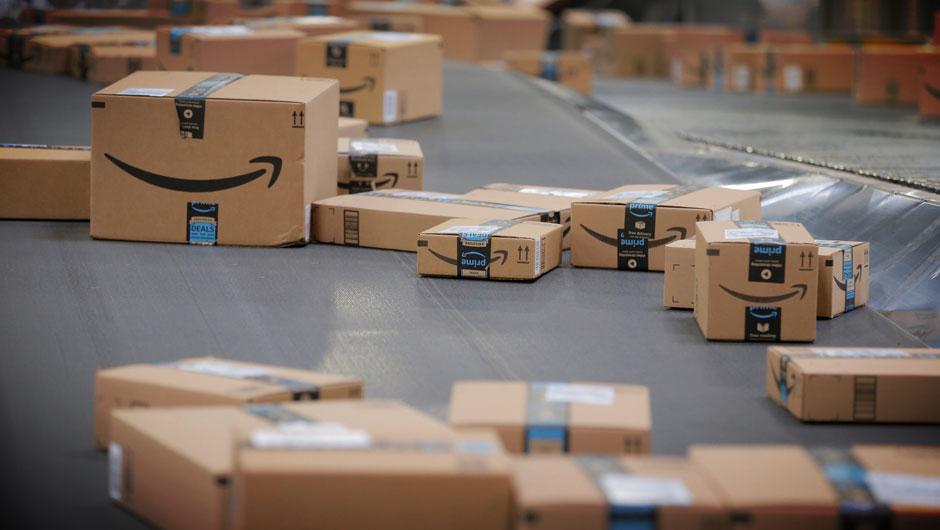 A key treasury parameter reveals how traditional US retailers are catching up with Amazon’s online shopping approach.

Retail giant Amazon saw the retirement last month of 15-year veteran treasurer Kurt Zumwalt, at a time when the company’s working capital advantage is coming under threat from retail rivals.

For years, the difference between Amazon and ‘big box’ US retailers like Walmart, Target Home Depot and BestBuy was encapsulated in a single parameter, the Cash Conversion Cycle. Traditionally, this number is positive because it reflects the fact that retailers would buy products from suppliers, hold them as inventory and only later get paid by customers who walked into their stores. Amazon turned this around by getting paid by customers first online and only paying suppliers later when it fulfilled orders from its warehouses.

Zumwalt highlighted the importance of CCC in a keynote speech at last year’s International Treasury Management conference in Geneva, where he said he was “attuned” to the contingency of a slowdown in Amazon’s negative CCC. Now the slowdown seems to have begun.

Under pressure from investors, the big box retailers have shifted to online sales. As a result, their CCC is declining towards zero. Walmart’s Cash Conversion Cycle has fallen from 12 days in 2014 to 3 days in the first half of 2019, according to quarterly filings. While Best Buy, Home Depot and Target’s Cash conversion Cycle stood at 11 days,32 days and 3 days respectively in the same period.

Meanwhile, Amazon’s CCC reached a record high of minus 20 days in the second quarter, up from its long term average of minus 34. This reflects Amazon’s diversification away from online retail, adding web services (AWS) and acting as a third-party seller marketplace. The ratio of working capital to total revenue has also dipped from the peak high for big-box retailers while the same ratio at online giant Amazon is rising, although still in negative territory.

“We’re changing our supply chain so that we’re moving product faster and more efficient so it stays fresher”. Steve Bratspies, Chief Merchandising Officer of Walmart said during a Q2 2019 earnings call. Walmart’s Days Inventory Outstanding declined from 45 days in 2014 to 42 days in the first half of 2019. It is also 6 days less than Amazon’s figure. 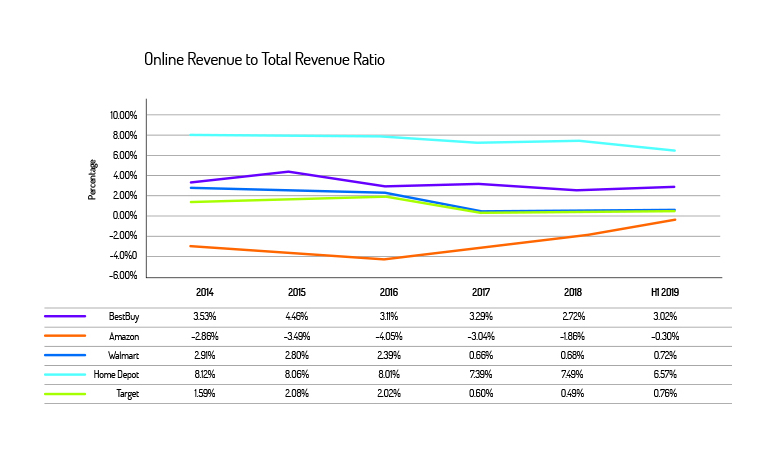 “Over the past few years, we’ve taken out nearly $10 billion in working capital, which has allowed us to invest for future growth. We’re leveraging technology, data and analytics in new ways to be more productive.” Brett M. Biggs, Executive Vice President and Chief Financial Officer of Wal-Mart said during the Investors Community Meeting in October 2018. The company reduced its working capital from nearly $14 billion in 2014 to $3.4 billion in H1 2019.
Target, Wal-Mart and Best Buy have reduced their working capital by nearly 20% to 75% from 2014 to 2019.

“Our store and supply chain teams continue to roll out and scale up an industry-leading suite of digital fulfilment options” Brian Cornell, Chairman and Chief Executive Officer of Target Corp said during a Q1 2019 earnings call. The company has increased its online presence from 2.6% of their total revenue to 7.2% in 2019. The big-box retailers have vastly improved their online and digital presence. While Amazon still remains the king of online sales, its online revenue to total revenue ratio has been steadily declining since 2014 and fell below 50% in 2019. One explanation for this is that Amazon has been diversifying its business into web services and also becoming a third party seller platform. 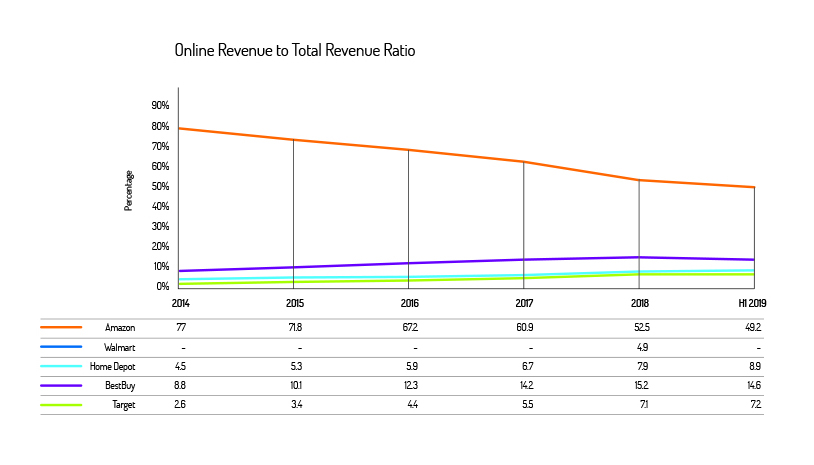 “We have done a lot to support our digital growth but we shouldn’t forget about store sales which continue to account for more than 90% of our total volume.” John Mulligan, Chief Operating Officer of Target Corporation said during a Q2 2019 earnings call. For Wal-Mart, Target and Home Depot, 90% of its sales came from offline stores. Among Big Box retailers, only Best Buy crossed 10% mark on online sales.

Managing the capital aspect of Amazon’s shift away from pure online retail will be a focus for the new treasury team. Assuming Zumwalt’s role as treasurer is former assistant treasurer Tony Masone. An Amazon spokeswoman declined to comment further on the company’s figures.