The total deposits by non-financial companies in Eurozone expanded by $132 billion in March and commercial deposits at top European banks grew by $121 billion with Barclays taking a lead.

As the Covid-19 pandemic spread across the world, Europe became an epicentre right after China. Non-financial companies in Europe have deployed their cash into safe havens, depositing $121 billion in Q1 2020 with HSBC, BNP Paribas and Barclays. Most of the deposit inflows occurred during March, according to data published by the European Central Bank. Reporting $63 billion of new deposits at its corporate and investment bank, Barclays is in third place globally for quarterly deposit inflows, behind Bank of America and Citigroup. Within Europe, Barclays has taken a lead with 34% growth in corporate deposit increase in Q1 2020, while its rivals, BNP Paribas and HSBC grew by 17% and 5.8% respectively. However, corporate deposits at Deutsche Bank fell by 1.9% in the same period.

At the end of Q1 2020, HSBC, Barclays, BNP Paribas and Deutsche Bank held $549 billion, $253 billion, $175 billion and $293 billion of corporate deposits respectively, according to their results presentations. 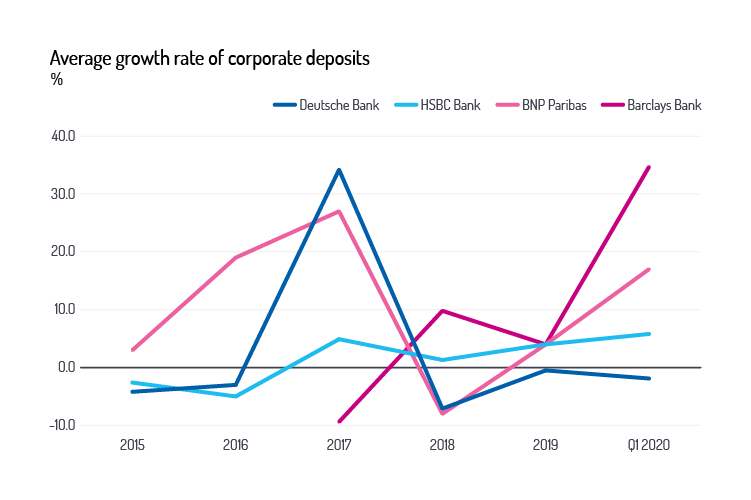 BNP Paribas’ corporate deposit growth has been credited to its position strengthening in Asian Markets. “The business consolidated its number-one positions in syndicated loans and corporate banks in Europe while strengthening positions in Asia where it has achieved for the first time a top-five position in cash management and corporate banking,” said Lars Machenil, Chief Financial Officer at BNP Paribas during the bank’s Q1 2020 investor call.

Adding further he said, “ As a result [growth in Asian markets] corporate banking revenues grew by 10% with fees up 18%. 24% increase in revenues on the capital markets platform and good resilience of transaction businesses worldwide”. According to the ECB, deposits by non-financial companies in the Eurozone grew by €120 billion ($132 billion) in the month from February 2020 to March 2020 which is the biggest one month rise since 1997. Highlighting the importance of liquidity during the Covid-19 crisis, €110 billion of this was in overnight deposits with Euro area banks.