Alibaba and the treasury of change The treasurer of China’s biggest tech company spoke to his peers at the International Treasury Management conference in Geneva. Nicholas Dunbar reports.

Randy Ou, Treasury Vice President of Chinese internet giant Alibaba, likes to tell a story about an interview with a job candidate who talked about his skill at producing five year forecasts. Ou cut him short. “At Alibaba I may not be able to predict what will happen even five months later”, Ou said. The story epitomises the pace of change at Alibaba, for which the numbers are stunning. Founded by Jack Ma in 1999, Alibaba Group’s e-commerce platform now handles an annual Gross Merchandise Volume of 4.8 trillion RMB in China retail marketplaces. The group’s total revenue increased by 58% from RMB 158 billion in fiscal year 2017 to RMB 250 billion million (US$39.8 billion) in fiscal year 2018, which mainly driven by the continued rapid growth of China and international commerce retail businesses, Alibaba Cloud as well as the consolidation of newly acquired businesses.

That explains Ou’s reaction to the interview candidate, and also to vendors of treasury management systems (TMS) who extol the long-term predictive power of their products. That misses the point at Alibaba, Ou says.

“We have a long-term view of where the company is going and how much cash we need, but we know that this changes every month – sometimes every week. So we have to draw a line and say it’s ‘good enough’. That’s why we need a lot of flexibility.”

And for many TMS products, the perfect is the enemy of the good, Ou believes.

“For a TMS set up, we go with our own, not because third-party systems are no good. They’re very good, even too good. They’re stuck in the traditional treasury mindset where each module has to do things in a certain way. If we ask to customise, we get told it will take a year.  For us, we can’t accept that.”

Another aspect of Alibaba’s change driven environment is the relentless focus on acquisitions and investments. The company owns $22 billion of stakes in other companies according to its March 2018 annual report and spent $10.5 billion on acquisitions in fiscal year 2018 alone. The responsibility for getting the cash planned and ready falls to Ou and his team. “Managing liquidity is essential for us in terms of managing change,” he says. “We have a lot of acquisitions every month”.

This activity is one reason Ou’s forecasting job is so difficult. “While the strategic investment team does give us a forecast, it’s only a reference point because most of the time it’s not accurate” he explains. “For understandable reasons, it’s difficult for them to forecast accurately. When we go to a target for example, if this week we are about to sign on Friday, what happens is often that the negotiations might be suddenly delayed by three months. And those numbers are big.”

Despite Alibaba’s outsized market cap and revenues, the treasury operation is a lean one. That makes collaboration all the more important, such as leveraging the company’s affiliate financial services arm in addition to working with banks. “I only have around 20 people in treasury, so I have to leverage internal and external partners” Ou says. “For example we set up and use thousands of Alipay accounts as well as bank accounts or virtual accounts. That gives us a very effective business process, depending on the context.”

Another striking aspect of Alibaba treasury is the perspective they bring to regulation-related challenges. “Being headquartered in China, we are based in an emerging market”, notes Ou. “We have to deal frequently with our regulators – the Peoples Bank of China (PBOC), or State Administration of Foreign Exchange (SAFE) – and some of their regulation is different to the rest of the world. That’s why some of my team have to be familiar with these regulations”. 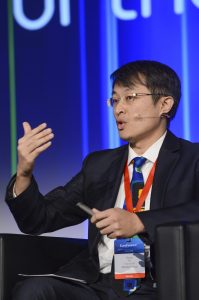 Of course, trapped cash is a leading bugbear for treasurers who operate in emerging markets. Ou has some helpful tips for his peers in such situations.

“My advice to my peers is to put yourself in the position of the country from which you can’t get cash out”, he says. “We think of things from the regulator’s perspective. When we use that mindset in our conversations with them, they’re more supportive”.

With the threat of a trade war and increased emerging market volatility, these skills are more essential than ever. “For example, this year when the renminbi began to fluctuate a bit more, and there were some windows when it was tough to get cash out because of depreciation” Ou recalls. “We’re not just challenging or complaining to the regulator in such situations. Instead, we also try to manage a reasonable liquidity pace according to the market situation”.

In a tech giant as innovative as Alibaba, you would expect the treasury operation to have a similar approach and here Ou has embraced some of the latest technology offered by the company’s cloud business.

“As an example, we’ve explored and implemented robotic process automation (RPA)” he explains. “I asked my team to go and figure out how that can help our treasury operations. My team learned how to use those RPA tools from the engineers at Ali Cloud, and now they are setting up a number of processes using the tools. As a result, for example, they’ve reduced the time of a process that used to take a few days to a few minutes.”

All the same, Ou is careful not to jump on the technology bandwagon for the sake of it. Instead, he prefers the middle path between early adopters and tech sceptics. “We try not to be at the extremes,” he says. “Don’t feel you have to jump immediately into something like blockchain. But don’t be at the other extreme, where I hear my peers saying they think new technology is hype. Some could end up becoming a real trend, not just as short term volatility.”

For treasurers in general, Ou emphasises the importance of being open to change. “For me, the advice is to be open and embrace change. Whether it’s AI or blockchain, change is coming, and be ready to embrace it.”